THE WAR OF THE ROSES

Since being rekindled in the Atlantic League in 2007, the War of the Roses has been the league’s most heated rivalry.

With two ballparks located roughly 25 miles apart and backed by centuries of history dating to medieval England, this modern version of the War has seen its share of skirmishes.

Overall, York has won seven seasons.  The Barnstormers have taken six, and there has been one tie.  Lancaster is in a drought.  With losing seasons in 2019 and 2021 bookending the pandemic year, the Barnstormers have not captured the cup since 2018.

These two clubs have had historic clashes.

Most notably were the 2011 and 2012 seasons when best friends Butch Hobson and Andy Etchebarren would work to outfox each other in marathon battles that meant control of the Freedom Division.  In 2011, Lancaster captured the first half flag with a nearly four-hour struggle that, with a fortuitous wind and some great defense, the Barnstormers held on to win, 4-3.  That happened in a day game in York; the two clubs loaded up buses to head back to Clipper Magazine Stadium for a night contest that started merely 2-3 hours after that historic first game ended.

Not three months later, York turned the tables and knocked the Barnstormers out of the playoffs in a dramatic five-game series with the deciding fifth game going into extra innings.

The same two clubs met again in the first round the following season.  Blake Gailen took charge of the first two games, slugging a trio of go-ahead homers, and the Barnstormers swept the series the following night, ending Etchebarren’s storied baseball career.  He and Hobson embraced at home plate following the game, and Etchebarren walked off the field for the final time, bringing a momentary tear to the eye of even the Barnstormers faithful in the midst of an otherwise jubilant time. 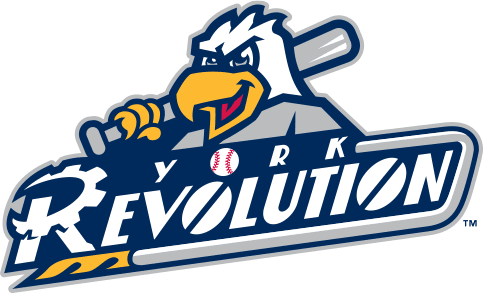 In 2017, the second half came down to the final weekend with Lancaster needing to sweep the three-game series.  Friday night’s game easily went Lancaster’s way, 11-1.  On Saturday, York jumped out to a 5-0 lead, but the Barnstormers countered and eventually grabbed a 7-6 lead in the top of the seventh as Darian Sandford stole third and raced home on a throwing error.

It was short lived.  A dropped pop up and a Chase Simpson grand slam, quickly turned things the other way, and York clinched the second half with a 13-7 win, sealing the Barnstormers fate that year, despite tying for the league’s best overall record.

In 2018, it was the Barnstormers that survived a dramatic last game of the season series to capture the cup.  It was late August, and the Barnstormers were trying to hold an inside track for a playoff berth and fend off York’s customary late charge.  The final game of the season series, with Lancaster needing a win to take the cup, saw the Barnstormers bolt ahead, 6-2, in the first four innings.  Double plays helped the Barnstormers to survive the fifth and seventh, but York had whittled the lead to 6-4, heading into the ninth.  Jared Mitchell and Alexi Casilla opened the inning with singles, putting the tying runs on base, and Mitchell moved ahead on a Melky Mesa fly ball.  Telvin Nash hit a screaming ground ball up the middle, but Vladimir Frias made a dazzling stop and turned it into a game-ending, Community Cup-clinching double play.  That win also was a key component to the Barnstormers, not the Revolution, gaining a wild card berth that year.

Even meaningless final games of the season have been dramatic.  In 2008, York struck for a four-spot in the top of the ninth, two on a double by Edgard Clemente and two on a homer by Matt Padgett to win, 8-7. After the Barnstormers were knocked out of contention in 2017, they came back to take Sunday afternoon’s season finale, 11-8, in 11 innings as Lance Zawadzki belted go-ahead homers in both the ninth and 11th innings.

Now, in 2022, these two clubs will meet a record 32 times, with 15 games at Clipper Magazine Stadium and 17 at People’s Bank Ballpark.  The action begins with the home opener in Lancaster and will not end until September 15.  Be there for all of it.

Wellspan Health has jumped on board as the sponsor of the series, working with the two clubs to enhance the excitement that is always there when the cross-river rivals lock horns.  Look for updates at both facilities and on social media throughout the summer.

Do you really want to delete card?

This process cannot be undone.

Card has been deleted successfully.